The city’s asleep, the sun won’t be up for another three hours, Syntagma square in central Athens is deserted except for a lone cleaner with a hose spaying the square and little groups of soldiers eying me suspicously run past them in front of the Presidential palace. Cats slinking around huge heaps of plasctic garbage bags, the sour smell of fermenting food and fish waste, since the garbage collection has been on strike for a couple of days now. I often have to swerve into the deserted highway, because the sidewalk is blocked by garbage, roadsigns, advertising, broken sewer covers. Step, step, step, night outside, night inside, an hour slips away, then suddenly another runner coming towards me, also runing the original marathon from Marathonas, but in the correct direction. We shake hands, then part ways. Gas stations, a night club, another Kiosky, interior decoration stores, a hospital, fences, empty lots, concrete, urban sprawl and every other mile one of those things that look like bird houses along the road, memorials to motorists killed along the busy four lane highway. The road is quite hilly, I am covered in a briny, oily cover, but sweating does not seem to work in this hot night. The conurbation peters out slowly, with fierce barking dogs behind barbed wire fences and the odd stray rustling throught the undergrowth when I run past, both of us shocking the other one into starts.

Step, step, step, another uphill road, another pass, then an ever so slight dark blueish tint up in the northeast, an hour before sunrise. I am getting slightly cold at least: „Der Mann mit dem Hammer“, as we call it in German, my body hitting the wall where it has to switch from buring carbs and the ATP sugars stored in the muscles to burning the dense, energy-rich fat of the body, but burning fat is hard work, and so my peripheral temperature drops, in sync with the coldest hour of  the night, at 25 centigrade. I eat my banana, then on, brambling through the brush.

Then, elation: I just spotted a big black dumpster with the logo of the Demos of Marathonas, the village of Marathon: Nike, I mutter to myself, hail to the dumpster. Still another 8 km to go, but I swerve right towards the beaches of Marathonas, where the Persian army had diesembarked 2507 years ago, step, step, step, some reeds, some sandy pathes, then the beach, tiny waves lapping on the sand, I run straight in. What a phantastic finish for a really, really unpleasant, hot, ugly, stinky marathon. The sun has come up, I never want to leave the cooling waves again. Finally, I get out of the water and run the final 7 km to Marathonas village in may dripping clothes, among little farm houses, workers on the fields and fiercely barking dogs. What a weird run from the metropolis to the countryside that in parts feels as remote and quiet as a Cuban sugarcane patch. 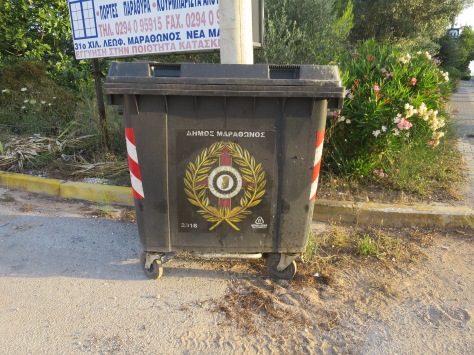 42,9 km, starting at 3 am on June 29th on a hot and muggy night with 25 centigrade from Handle Bar in Psiri neighborhood in Athens via Syntagma square, past the Benakis Foundation and the War Museum, then roughly along highway 54 all the way to Marathonas Beach (where the Persian army disembarked from their fleet in 490 AD and was repelled by the Athenian army for a swim, then the last 7 km to Marathonas village with the Marathon Street Run Museum (entrance fee 2 Euros, souvenir T-Shirt 8 Euros) that also shows the original medal for the first Olympic Marathon from 1896.

I was inspired by the Japanese novelist Haruki Murakami’s first marathon that he did in the same reverse order, accompanied by a car with a photographer. He wrote about this ordeal memorably in his book „What I talk about when I talk about Running„.

So from reading Murakami’s account I knew the run would be unpelasant. I was surprised, though, that I often had to scramble through the brambles along the road if there were too many cars for me to safely use the tarmac. Especially in the two steep, curvy sections there sometimes was not even a footpath or grassy patch to run on.

To my surprise, I ran into another marathon runner who was coming from Marathonas that same night, doing the run in the original direction.

Back by bus or taxi to Plakentias Metro station in Athens. This was the most unpleasant marathon I have done, mainly because there is no proper sidewalk for most of the way, and the highway is partly four lane and extremely busy. The heat during the day often gets so intense that you have to run at night. So. If you want to go on a pilgrimage to the original Marathonas village and are ready to suffer for it, like you are supposed to be on a pilgrimage, go ahead. Everyone else, at least wait for the annual official marathon from Marathonas to Athens, when the road is closed to traffic and you can at least have a smooth run.

Technicalities:
Take a camelbak backpack with at least 2 litres of water with you, maybe 4 litres in the heat would make more sense, but you can also buy water until the city limits at the Kiosky shops that line the road and are open all night, but they peter out around km 15.

I also suggest an apple and banana.
You don’t need a headlamp, the street lights are bright.

To get back from Marathonas to the city center of Athens or for example the Plakentia Metro Station, take a bus that goes around once an hour during the day. It takes either 90 Minutes if it goes straight along the highway, or around 2 hours if it goes along the Marathonas beach, which is alon the original Marathon route.

Or look at Marathonas main square for a cab or ask at the grocery store to help you or call this number for a cab: 694 39 31 218, ca. 25 Euros to Plakentia Metro station, to the city centre it could cost around 50 Euros, I guess.

Here’s a view of Marathonas beach and the Lake Marathonas reservoir faintly in the background, seen from our plane on the way back home:

Find it on Google Maps: